Maybe - but not just yet

Prof King concluded by saying Predator Free NZ was still a long way away but “don’t despair, history is encouraging!”, and DUNZ would play an important role.
In the meantime we must keep using whatever tools we have so we still have native species surviving by the time we develop something better, protecting duck nesting sites is possible and needed now.
PFNZ is going to be much more difficult as it requires development of as-yet-unknown, 100 per cent acceptable methods to control predator replacement rates.
Published in Issue 175
Tagged under
Read more...
Monday, 26 November 2018 08:06

Waipa wars – from muskets to mustelids 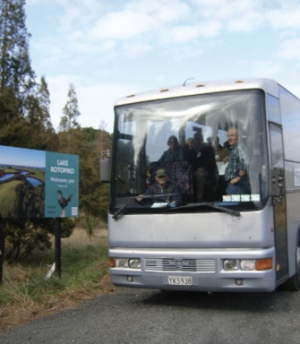 Peat lakes and battle sites were the main themes of this year’s bus trip at conference courtesy of Ducks Unlimited’s knowledgeable tour guide Tony Roxburgh.
Tony is the Waipa District Council’s heritage and museum manager and he also wears another hat – as Wetland Trust of New Zealand Chair and Trustee. He took DU members on a nature, culture and history tour of the Waipa region.
The first point of interest was Lake Rotomanuka, one of about 16 lakes in the Waipa District. It was once one lake but is now two separate bodies of water. Around the lakes, public walkways, buffer margins and sediment traps are being developed by Living Waters, a partnership between the Department of Conservation and Fonterra.
Native eels and smelt can still be found in the lake but have been joined by introduced species: rudd, carp, koi carp and catfish. First stop on the bus trip was the Lake Serpentine/Rotopiko sanctuary. It is enclosed by a predator-free fence, which was built with a $500,000 grant.
The 50-hectare sanctuary is thought to be mammal free after mouse incursions were curtailed by extending the fence netting down into a trench dug along the fenceline.
But the project hasn’t been all smooth sailing. As well as having to put its planned $5 million-plus visitor centre on hold, the sanctuary had encountered an unforeseen problem – once news of the avian safe haven got out to the passerine community, thousands and thousands of starlings, sparrows and finches were swooping into the sanctuary at dusk to sleep overnight.
They leave behind mountains of guano, which, over time, would change the chemistry of the peat lake.
Tony said deterrent measures such bangers and laser lights were being trialled.
Releases of kiwi and takahe are on the sanctuary’s wish list but pateke (brown teal) will be the first species to be introduced. Tony said the visitor centre project would be replaced with a more modest and modular alternative – beginning with a three-bedroom house for volunteers and school groups to stay in. With no electricity on the site, the house will have solar panels, and a composting toilet.
Following a hearty buffet lunch at the Five Stags restaurant in Pirongia, everyone boarded the bus for the nearby Alexandra Redoubt. This fortification was constructed by the constabulary after the land wars in case Maori tried to take back their confiscated land.
During the tour, Tony pointed out many other historical landmarks, including pa and battle sites, and natural features such as the volcanoes and kahikatea stands dotting the landscape.
Published in Issue 175
Tagged under
Read more...
Monday, 26 November 2018 07:25

Neil Candy reported that Jim Law had replaced Ken Cook as a trustee on the Waterfowl and Wetland Trust, which was “ticking along really well” with more than $500,000 in the bank.

Reporting on the work of Wetland Care, Will Abel said $10,800 had been spent on three wetlands in the past year, creating about 10 acres of wetland

ROYAL SWAN
Neil said the successful breeding of royal swans had been declining but fortunately had coincided with a drop in inquiries for them. The reason for the lack of breeding success was unknown and the few lightweight birds available from Peacock Springs in Canterbury meant it was difficult to tell the boys from the girls to find a breeding pair. Compatibility was another problem, with one bird sometimes killing its intended mate.
WHIO
Neil Candy reported, on behalf of Peter Russell, that whio had had their best breeding-for-release season. Seven pairs in the North Island produced 75 eggs, with 46 surviving to be released. Of those birds, 15 went to Egmont National Park, 23 to Whanganui National Park and 8 to Tongariro National Park. In the South Island, four pairs produced 45 eggs, with 30 released, all in rivers around Hokitika.
PATEKE
Meanwhile, pateke in Northland have benefited from predator control introduced to protect kiwi in the area, and the ducks are now established from Mimiwhangata to Pataua North

Emma Williams reported that of one of four bitterns fitted with a transmitter at Lake Whatuma was missing, but it was hoped it would return for the breeding season. DU still has two transmitters to place.
Four other transmitters had been placed on chicks found starving in urban areas. They were rehabilitated and two were released in BOP and two in Canterbury. One has survived two years on and its transmitter had just died.
WEBSITE
Paul Mason explained the layout of the new website which is now on a new platform and is more accessible to devices such as tablets and smartphones. Visitor numbers and search results for the website were healthy.
NZ GAME BIRD HABITAT TRUST
John Cheyne reported that the trust has allocated $96,000 in 2018 for 24 projects throughout New Zealand. In 2018, the trust had received 21 applications for funding to assist with wetland restoration and creation

Jim Law reported that restoration work at the Wairio wetland this year had cost $9500, bringing DU’s total expenditure over the 13 years since the project began to more than $215,000.
A plan to divert water from Matthews Lagoon to the wetland on its way into Lake Wairarapa was still awaiting approval from the Greater Wellington Regional Council.
The council was continuing its predator control and its traps were serviced three or four times a year. Large numbers of mustelids and feral cats are still being caught, highlighting reinvasion as a serious problem. DOC was doing a good job of maintaining the bund wall walkways.
Wairarapa Moana, which encompasses Wairio, is included in a Treaty of Waitangi settlement, meaning ownership of the wetlands will be transferred to Ngati Kahungunu and Rangitane. Ngati Kahungunu, the principal iwi owner with 90 per cent, has indicated that it would like DU to carry on with its work and it will be business as usual. The iwi also wants to re-establish a Lake Wairarapa committee and it would like DU to be a part of that.
Published in Issue 175
Tagged under
Read more...
Monday, 26 November 2018 07:17

Decisive year ahead for Board 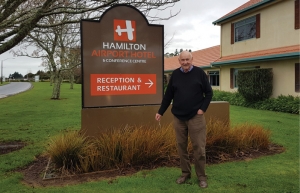 Where to from here will be the big question facing the DUNZ Board in the coming year. President Ross Cottle, in opening the formal business of the 44th AGM, said that, with an ageing membership and fewer members keen to do the work, the future direction of Ducks Unlimited would be on the Board’s agenda this year.

Measures already in place or under consideration were making Flight a two-yearly publication and changing the conference to a biennial event rather than yearly. With fewer demands to create new wetlands and maintain the established ones, the Board would be looking at other ways, including research scholarships, to support DUNZ’s goals.

Ross thanked John Cheyne, who resigned earlier in the year, for his four years as president and for raising the profile of bittern. Ross also paid tribute to those members who had passed away during the past year: Ian Pirani, Nancy Pain, Audrey Pritt, Alan Wilk and Robin Borthwick. Joyce Brooks also passed away after the AGM.

Treasurer John Bishop presented the accounts and updated members on the new rules for charitable trusts, which require entities to state their purpose. DUNZ had submitted the following mission statement: “We deliver and advocate for effective wetland restoration, development, research and education; and support the preservation of threatened waterfowl and the ethical and sustainable use of wetlands.”

Published in Issue 175
Tagged under
Read more...
We use cookies to ensure that we give you the best experience on our website.
I accept