Waipa wars – from muskets to mustelids 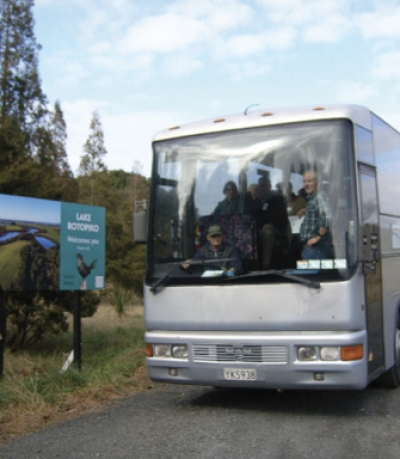 First stop, Lake Rotopiko Ian Jensen
Peat lakes and battle sites were the main themes of this year’s bus trip at conference courtesy of Ducks Unlimited’s knowledgeable tour guide Tony Roxburgh.
Tony is the Waipa District Council’s heritage and museum manager and he also wears another hat – as Wetland Trust of New Zealand Chair and Trustee. He took DU members on a nature, culture and history tour of the Waipa region.
The first point of interest was Lake Rotomanuka, one of about 16 lakes in the Waipa District. It was once one lake but is now two separate bodies of water. Around the lakes, public walkways, buffer margins and sediment traps are being developed by Living Waters, a partnership between the Department of Conservation and Fonterra.
Native eels and smelt can still be found in the lake but have been joined by introduced species: rudd, carp, koi carp and catfish. First stop on the bus trip was the Lake Serpentine/Rotopiko sanctuary. It is enclosed by a predator-free fence, which was built with a $500,000 grant.
The 50-hectare sanctuary is thought to be mammal free after mouse incursions were curtailed by extending the fence netting down into a trench dug along the fenceline.
But the project hasn’t been all smooth sailing. As well as having to put its planned $5 million-plus visitor centre on hold, the sanctuary had encountered an unforeseen problem – once news of the avian safe haven got out to the passerine community, thousands and thousands of starlings, sparrows and finches were swooping into the sanctuary at dusk to sleep overnight.
They leave behind mountains of guano, which, over time, would change the chemistry of the peat lake.
Tony said deterrent measures such bangers and laser lights were being trialled.
Releases of kiwi and takahe are on the sanctuary’s wish list but pateke (brown teal) will be the first species to be introduced. Tony said the visitor centre project would be replaced with a more modest and modular alternative – beginning with a three-bedroom house for volunteers and school groups to stay in. With no electricity on the site, the house will have solar panels, and a composting toilet.
Following a hearty buffet lunch at the Five Stags restaurant in Pirongia, everyone boarded the bus for the nearby Alexandra Redoubt. This fortification was constructed by the constabulary after the land wars in case Maori tried to take back their confiscated land.
During the tour, Tony pointed out many other historical landmarks, including pa and battle sites, and natural features such as the volcanoes and kahikatea stands dotting the landscape.
Read 988 times Last modified on Monday, 26 November 2018 08:15
Tweet
Published in Issue 175
Tagged under

View the embedded image gallery online at:
https://www.ducks.org.nz/flight-magazine/item/217-waipa-wars-from-muskets-to-mustelids#sigProId8d26632958
More in this category: « CONFERENCE REPORTS Predator Free New Zealand »
back to top
We use cookies to ensure that we give you the best experience on our website.
I accept