The Bitterns are a Booming 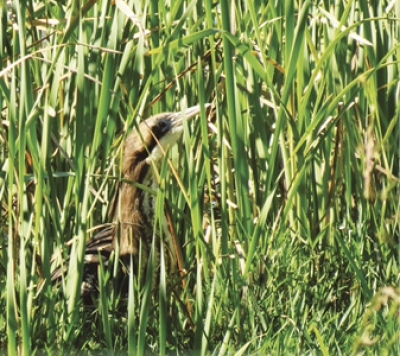 Elusive: A master of disguise – the Bittern Dougal McKenzie

Bitterns are an iconic wetland bird which is becoming increasingly rare through wetland loss and predation by mammalian predators.

They are the apex avian predator in many  wetlands and their presence gives an indication of overall wetland condition and health.

I was fortunate that Greater Wellington Regional Council engaged me last year through my small wetland consultancy WetlandWorks to carry out wetland bird surveys on a number of wetlands on the eastern side of Lake Wairarapa. This included Boggy Pond, Mathews Lagoon, Wairio wetland, JK Donald Block and Bartons Lagoon.

Each trip was 8-10 days duration and we based ourselves at Kilmore Lodge, a great home away from home owned by Wellington Fish and Game. One of my recommendations to the Council was the need to carry out a  bittern survey of all wetlands around the lake to get a good handle on the population and what threats each site was subject to.

The survey, carried out over two weeks in  October and November 2013, focused on  locating male bittern who in spring advertise their presence by making a booming call much like a fog horn. They establish territories in mainly dense raupo and use this call to  advertise their presence to available females and make other males aware not to come near. The main calling periods are one hour either side of sunrise and sunset. Occasionally they boom all night and all day when there is plenty of action on. This requires regular early starts and late finishes for the bittern counters.

During the survey 20 male bittern were recorded booming and their territories plotted on a map. Seventeen of the booming birds were calling from patches of raupo and the other three from scattered wet patches of oioi (jointed rush), closer to the eastern lake edge.

While bittern are polygamous and males can  attract more than one female to their territory, some males are unsuccessful at attracting any. Other studies indicate the sex ratio is about 1:1 so the total population for Wairarapa Moana and associated wetlands is around 40 birds. A report is currently being prepared for Greater Wellington Regional Council that will discuss how these wetlands can be better managed for bittern.

A “meeting of the minds” for people working on bittern was held at Kilmore Lodge, Boggy Pond, Wairarapa on November 2 last year. This was attended by the DOC bittern scientist from Christchurch, other DOC staff, a university  student doing a doctorate on bittern, and Greater Wellington Regional Council staff.

This was followed by a get together of local people and landowners interested in bittern around Wairarapa Moana. About 25 people overall.

The presentations and discussions that followed focused on the biology of bittern, habitat use and threats from plant and animal pests and was followed by a short trip to the Boggy Pond car park where everyone heard three of the local male bittern booming and advertising their wares.

A great opportunity for everyone to share information on this threatened but still keystone wetland bird.

More in this category: « Wetland Care Big reward for capture of bulbul »
back to top
We use cookies to ensure that we give you the best experience on our website.
I accept