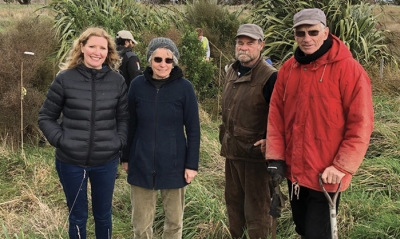 Ducks Unlimited recently received a substantial donation to put towards its restoration work at Wairio Wetland.

Janet and Patrick Velvin, who live in South Wairarapa, are passionate about conservation, particularly water conservation, and contacted The Gift Trust, a philanthropic advisory service, to identify suitable causes they could support.

Cheryl Spain, executive director of The Gift Trust, said they had been impressed with the research on Wairio and DU’s partnerships with the Department of Conservation, Greater Wellington Regional Council and Victoria University, particularly its links with the student research projects at Wairio, and had chosen Wairio as a suitable recipient.

The Velvins visited the wetland for the first time and took part in a planting day with Victoria Uni students in early July.

After helping with the planting, they were given a guided side-by-side tour by Ross Cottle, who identified a suitable site on a promontory for a viewing hide, which could be constructed with some of the funds donated by the Velvins.

During the tour, Patrick asked if there were bitterns in the wetland, and as if on cue, a bittern obliged and flew in front of the them.

Janet became aware of the work at Wairio Wetland through the book Wairarapa Moana: The Lake and its People.

Janet said after the tour they were impressed with Ducks Unlimited and happy to give a donation towards the work at Wairio.
Read 1012 times Last modified on Saturday, 09 November 2019 23:41
Tweet
Published in Issue 177
Tagged under

View the embedded image gallery online at:
https://www.ducks.org.nz/flight-magazine/item/357-bittern-steals-the-show#sigProIdccf5a3b34a
More in this category: « Planting day at Wairio Pateke numbers improving »
back to top
We use cookies to ensure that we give you the best experience on our website.
I accept