Wetland restoration under the microscope 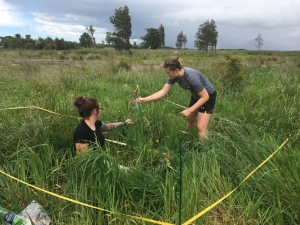 Restored wetlands on private farms deliver ecosystem services and increase diversity, with varied results, a recent study has found. Shannon Bentley, a master’s student at Victoria University and the first recipient of a Wetland Care Scholarship funded by Ducks Unlimited NZ, is studying how wetland restoration on farms changes plant, soil, and microbial characteristics. In 2018-2019, as a part of the research group, Wetlands for People and Place, she sampled 18 privately restored wetlands and paired unrestored wetlands on farms in the Wairarapa.

For her master’s thesis, she analysed the wetland plant communities, soil physiochemical characteristics, and soil microbial communities to understand how they change with restoration. She found that wetland restoration on private property shifts plant, soil, and microbial characteristics towards desirable remnant wetland conditions. She also showed that the outcomes of wetland restoration varied within and between wetlands.

More than 40 per cent of New Zealand is held in private ownership, and private property holds huge potential for wetland restoration, containing 259,000km of stream length (Daigneault, Eppink, & Lee, 2017). Additionally, wetland degradation is extensive in lowland environments which are primarily in private ownership.

The outcomes of wetland restoration undertaken by landowners’ own prerogatives are poorly tracked. Private restoration is driven by personal preferences and finances, so the extent and form of restoration are varied. For example, the 18 wetlands sampled in Shannon’s study were restored in many different contexts and using many different techniques.

Wetlands differed in time since initial restoration (6 months to 42 years ago), size (0.4ha to 33.7ha), upstream watershed area (4ha to 2,263ha), dominant plant community (woody v herbaceous), and the number of restoration techniques used (2 to 8).Wetland restoration is beneficial for a number of reasons, but particularly for regaining wetland ecosystem services and increasing native biodiversity. Ecosystem services are ecological processes and functions that have beneficial outcomes for humans.

Shannon found wetland soil microbes increased in biomass and fungal dominance after restoration. These changes, in part, explained the increase in capacity for wetlands to deliver ecosystem services.

Soil microbes are responsible for decomposition and nutrient cycling. A greater mass of microbes means restored wetlands have more capacity for biogeochemical cycling and decomposition, which can accelerate processes such as carbon burial, as
seen with the increased carbon in restored wetland soils compared with unrestored soils.

Each restored wetland showed a lot of variability of soil and microbial responses within and across wetlands. Because wetlands are found along a hydrological gradient between saturated soils and drier, upland soils, the microbial and soil properties differed according to the landscape position.

Soils close to the water’s edge, as a result of being saturated, had more carbon, microbial biomass, and more fungal biomass, and were less dense. By examining the plant communities, Shannon found that, after restoration, plant diversity increased within the plot and across the landscape. This means that with restoration, habitat heterogeneity increases, a beneficial outcome that increases ecosystem stability and the number of ecosystem services produced.

Additionally, she found that wetland soils and plant and microbial communities showed different levels of recovery that were not consistent with the length of time that they had been restored.

Some projects’ soil and microbial characteristics recovered faster than others. The main difference between fast and slower-recovery wetlands was the hydrological regime.

There is increasing recognition that we need mixed agroecosystems so food production does not compromise other ecosystem services.

Wetland restoration is gaining significant traction as a solution to issues surrounding water quality, climate regulation, flooding, and loss of native habitat, and this study has shown that private restoration is effective tool to do just this.

Shannon concludes her report by saying: “I would like to thank all the landowners that generously allowed us to sample their wetlands; each site we visited was so beautiful and unique.

“I thank Ducks Unlimited for the funding that allowed me to do this research. I also thank the Holdsworth Foundation, the Sir Hugh Kawharu Foundation, Wairarapa Moana Trust, and Victoria University for the financial support I have received.

“Finally, I would like to thank my supervisors Dr Julie Deslippe and Dr Stephanie Tomscha for their guidance and help in producing this research.”

A seldom-seen carnivorous species has been found during a survey of rare plants at Waikato’s Whangamarino Wetland.

It’s been more than a decade since threatened plants have been surveyed at Whangamarino Wetland, with the last survey in 2009.

“We were particularly excited when we found Utricularia australis or yellow bladderwort, an aquatic carnivorous plant,” Lizzie Sharp said.

“We had several ID books out and a lively debate about whether it was yellow bladderwort or the invasive weed Utricularia gibba or humped bladderwort.”

leaves, and closer inspection revealed it was yellow bladderwort, which is known only in the North Island.

“Yellow bladderwort was found at one site in the 2009 survey, and prior to that, at 11 sites based on historic data.

“By 2009, 10 of those sites had been infested with humped bladderwort, and as more than 10 years have passed since that survey, we expected the worst ...”

The bog in the Whangamarino Wetland is treacherous so visits by the public are discouraged. There are no tracks into the swamp, but people are permitted on the Maramarua and Whangamarino rivers and Reao Stream.

For more information about Whangamarino Wetland and its biodiversity, visit: www.doc.govt.nz/our-work/freshwater-restoration. 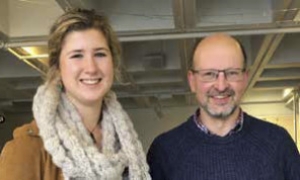 Shannon, who is from Upper Hutt and Carterton, has a bachelor of science degree and is now studying for a master’s in ecology.

She is looking at facilitating effective wetland restoration in the Wetlands for People and Place research group.

“This project has been an amazing opportunity to contribute to the Wairarapa’s environment and clean up the Ruamahanga River.

“In the Wairarapa, farmers have been undergoing wetland restoration on private property. Farmers have used different restoration techniques to re-establish a wetland ecosystem,” she says.

“With this information, I hope to be able to advise which wetland restoration techniques are effective at restoring ecosystem services.”

Her goal is to quantify the gain in nutrient retention, flood abatement, carbon storage, and plant and microbe diversity in 18 restored wetlands of differing ages in comparison to 18 unrestored wetlands.

“By measuring how wetlands are functioning (via ecosystem services) after they have been restored, and looking at what restoration treatments are effective, this project will be able to determine how effective our current restoration efforts are,
and which restoration techniques are working.”

DU Director Jim Law says, of Shannon: “She is exactly the kind of person that our scholarships are directed at. She is a bright, passionate young Kiwi.” Shannon’s supervisors are Dr Julie Deslippe, assistant director of the Centre of Biodiversity and Restoration Ecology at Victoria, Dr Stephanie Tomscha, head of the Wetlands
for People and Place project and a postdoctoral research fellow at Victoria, and Ra Smith.

Ra Smith is an environmental iwi liaison for Shannon’s iwi, Ngāti Kahungunu, and a whanaunga (relative). He is involved in the effort to clean up Lake Wairarapa. 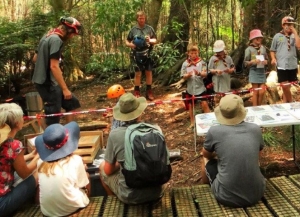 The importance of wetlands was celebrated on Sunday, 2 February 2020, with events around New Zealand for World Wetlands Day.
This year’s theme was Wetlands and Biodiversity, to draw attention to the global decline in biodiversity and the crucial role of wetlands as biodiversity hot spots. The day marks the 1971 signing of the International Convention on Wetlands in the Iranian city of Ramsar.

The 2020 Puweto Festival honoured the day at Lake Rotopiko, which DU visited during its 2018 conference in Hamilton. Wetland bird masks, a critter colour-in, mudfish scrabble, eels and ladders, live geckos, kahikatea tree climbing and a virtual reality lake dive were among the offerings for families who attended.
The event was named after the shy puweto/spotless crake that lives around the margins of the lake.

Rotopiko is being developed into a National Wetland Centre, with newly completed boardwalks, information panels and an interactive discovery trail. During the festival, Treelands (local arborists) climbed up kahikatea to install bat roost boxes – something they have been doing all over the region. Other activities around the country included a guided walk at Harbourview-Orangihina Park in Te Atatu on 1 February and Matuku Reserve Trust in West Auckland had an open day to show off its wetland restoration and give the public a chance to see pateke.

In Wellington, Zealandia visitors were able to talk to experts from organisations including the Hakuturi Roopu, Greater Wellington Regional Council and Lakes380 to learn more about freshwater and wetlands in New Zealand.

In Marlborough, visitors were invited to check out a community-led wetland restoration project and walk around the Grovetown Lagoon. A guided walk was held around the Travis wetland in Christchurch.

The QEII National Trust took the opportunity on World Wetlands Day to introduce a new QEII wetland covenant to protect the Galloway Wetlands in Ashburton.

The trust said: “Craig and Lyn Galloway bought their farm in 1986 on the south bank of the North Branch of the Ashburton River. When they purchased the property, all paddocks had been developed except for the wetland paddock which remained uncultivated.

“Craig and Lyn applied to the Ashburton Water Zone committee for a grant to expand their successful riparian planting programme to the margin of a stream and man-made pond.

“Spring-fed channel wetlands like theirs have virtually disappeared elsewhere on the Canterbury Plains. They decided to place a covenant over the whole
6-hectare wetland complex to preserve the relict pre-human vegetation.

“The Galloway Wetlands protect the only known manuka, sphagnum moss and the pink-flowered wetland ladies tresses orchid (Spiranthes novae-zelandiae) on the Ashburton Plains.” Matagouri and the rhizomatous shrubby violet known as a porcupine shrub have survived on the stony ridges in the covenant but both are rarely encountered elsewhere in the region, the QEII Trust said.

The landowners plan to supplement these species with new plants, grown from seed sourced from the local area. This covenant is one of very few
that meet all four national priorities for protecting rare and threatened biodiversity on private land.

But it was not all good news for wetlands. In a statement released to mark World Wetlands Day, Forest and Bird said West Coast landowners had wiped out more wetlands in the past 20 years than landowners in any other region. Aerial images from around the country supplied by Landcare Research showed that wetlands on private land were still disappearing at an alarming rate.

The West Coast was the largest wetland region in New Zealand, with nearly 84,000 hectares of freshwater wetlands, 14 per cent of them in private ownership, Forest and Bird said.

Wetlands need water to function and here we are again engrossed in another dry summer with severe drought conditions being experienced in a number of regions.
This adversely impacts on water levels in our wetlands and the biodiversity they support. We cannot ignore that climate change is having an effect.
What can we do about it?
DU needs to continue its good work with protecting and restoring wetlands, increase our membership, maintain the excellent relationship we have with many partners in the wetland conservation area, and expand our fund raising efforts. These are all key areas
which the DU Board will be addressing over the next 12 months.
The dates for this year’s AGM are at the Distinction Hotel, Palmerston North, for the weekend of Friday July 31 to Sunday August 2, 2015.
Look forward to seeing you all there.
John Cheyne
Published in Issue 163
Tagged under
Read more...
Wednesday, 07 February 2018 01:00

Published in Issue 169
Tagged under
Read more...
We use cookies to ensure that we give you the best experience on our website.
I accept