Two nights west of the spiral 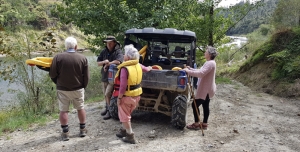 The winners of a DU auction for a Blue Duck Station experience had a ball. John Dermer reports.

It’s quite a drive! You turn west at Raurimu, famous for its railway spiral, and travel a windy gravel road till you are sure you are lost. When you come to a gate across the road, you’ve arrived.

The station buildings, including the Blue Duck Cafe, sit on a piece of flat land between the confluence of the Retaruki and Whanganui rivers. Our host, Dan Steele, has bought nearby farms as they had buildings on them
for the burgeoning staff that his tourism business needed.

The lovely old homestead that his parents, (“the olds”) live in is at the end of the road and has magnificent views up and down the Whanganui. The garden has some very old trees – oak, beech plus many fruit trees.

Kees and Kay Weytmans and Diny and I had arrived for our two-day stay. We had bought this at the DUNZ auction last winter and as we had had such a good time on Brian and Wendy Simmons' boat the previous summer, we thought we would try Dan’s Blue Duck Station experience this time.

We stayed in a sunny three-bedroom, three en suite lodge with communal kitchen, large dining table plus masses of outdoor seating. The rooms were fitted with quirky handles, hooks and knobs. Unfortunately we forgot to bring a gun to shoot the rabbits!

Dan and Sandy farm Blue Duck Station and neighbouring Retaruki Station, which they lease from his parents.

It’s mostly steep country – steep to overhanging for much of it, with bush and manuka scrub covering a lot of it. There is some easier country on it but I have to confess that I have been thoroughly spoilt running a small nearly flat farm for a long time now (actually 46 years). Dan, you can keep your hills!

The gorges are deeply incised with sheer papa sides, often showing evidence of a catastrophic rainstorm which lashed the area about two years ago. Not much use for stock water but great for whio.

Dan showed us around in a well-used side-by-side. The tracks are pretty good and he is a mine of information about the area, its history and the people who have lived here.

The station is right beside the Whanganui River, rich in Māori history and the major highway for many years.

One of the houseboats, floating hotels of the time, finished its days moored in the Retaruki just below Dan's parents' homestead.

We saw a beautiful stand of kahikatea (white pine), with other species, rimu, miro, matai and pukatea, growing as well. Dan told us about the well-appointed cave that someone had stumbled on in a sheer face nearby.

Mohawk Joe was growing pot on a well tended area nearby and living in the cave. The police just laughed when they saw it. Dan still says hello to Mohawk when he sees him.

The best story was from wife Sandy. She had only visited Blue Duck a couple of times but wrote in a visitor’s book that she was coming back soon. To marry Dan! Dan loves this country. He has just bought a block of 750 acres with about a third of it grazable. The rest is in native bush and scrub.

Not a block that was going to make him much money from farming but Dan had spotted a knob with a view of the mountains, Ruapehu, Ngāuruhoe, Tongariro.

This was reasonably accessible by ATV and he has a very good chef, Jack Cashmore, who happens to be a carpenter as well.

Hence they had the bright idea to build a high-class restaurant and three chalets up there. The plan is to have top-class fine dining and for people to enjoy a backcountry experience.

Typically, Dan has gone half-shares with the chef in the venture. They hope to finish the complex by September. Give Dan a call as it will be fabulous. I hope this venture goes well for them.

Dan’s business is now heavily slanted towards tourism. (We hardly heard a New Zealand accent the whole time we were there [pre-lockdown]).

He employs 12 people, many involved in tourism, so he was not a “happy chappy” to get the news about Covid-19.

This shut down the tourism side virtually overnight so he is now dependent on his farming and mānuka honey production, with carbon farming from the mānuka and some plantations which have been planted.

One very rough looking block had been planted in redwoods (Sequoia sempervirens) on advice from Horizons.

(I wonder how they will perform on this site.) Another block is in radiata so carbon farming should help through this rough patch.

The map in the Blue Duck Cafe showing Dan’s trap lines is very impressive. He has predator traps all over the place.

More than a thousand of them.

He is great man for doing deals with people who stay there. Free accommodation if you do a few days' rebaiting traps.

Not a great job when you have to remove a very smelly hedgehog. Rats are the main capture at the moment but Dan reckons he will never get rid of them.

We did see a pair of whio, happily sitting on rocks in the river, so all the effort he is putting into his predator control is obviously working.

A jet boat ride down the Whanganui was a highlight. The river is very low so Dan had to keep a sharp eye out for shallow rapids. Also for the many kayakers travelling downstream.

For those of you thinking the gray duck is on the way out, you should see the number on the Whanganui. They are plentiful.

I noticed the same thing many years ago in my own jet boating days, so the numbers seem to be hanging in there. 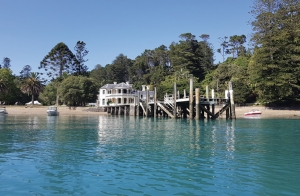 One of this year’s auction items was a two-night fishing trip in the Hauraki Gulf for four people. Kees Weytmans has been there, done that, so here’s what this year’s winners can expect.

At the 2018 conference auction in Hamilton, John and Diny Dermer and Kees and Kay Weytmans won the two-night fishing trip in the Hauraki Gulf on Brian and Wendy Simmons’ 40-foot launch.

It was an all expenses paid trip; food (breakfast, lunch and dinner), private cabins, wine, beer and all the fishing gear.

Late February 2019 was the date that suited everyone and so on a Friday afternoon, we were welcomed on to the launch.

Now, I have done many things in my life (some of which have not been done by many others...) but I never been on a “boat” this size – just MARVELLOUS!

Brian and Wendy were the most hospitable hosts you could have wished for. The conversation was lively, always interesting. We came well prepared with Sea-Legs tablets but we didn’t need them. The beer and wine flowed freely and the Drambuie was on tap. Wendy can make really nice meals in a reasonably small place and we ate well.

Brian, with his all encompassing knowledge about the landscape, scenery, history and who owns which boat and which bach was an ever-entertaining host.

We visited Governor George Grey’s mansion as well as an old copper mine.

The fishing was excellent in that we caught many, many fish. And that’s what’s it about – the thrill of the catch. Unfortunately we had put most of them back due to size. But there was plenty for the next morning’s breakfast.

We like to thank Brian and Wendy for them being most generous. We had a wonderful time with them.

And Kay and I would like to express our best wishes for a speedy recovery for Brian after his fall. Only at the last conference, did we hear about his accident. We wish him well.

This year the Weytmans and the Dermers won an auction for a night at Blue Duck Lodge.

New auctioneer gets the dollars

Two successful auctions, one silent, the other noisy and very lively, kept members alert with lots of laughter to boot.

Auctioneer Dan Steele successfully filled the big shoes left by Bob Wood who sadly died in February this year. Dan’s banter was every bit as funny as Bob’s had been, and he cajoled many a bidder to go “just that little bit higher”.

The main auction raised $5255, the silent  auction plus the raffle raised $1540. All thanks to those members who donated some amazing items for the auctions and the raffle.

Published in Issue 157
Tagged under
Read more...
We use cookies to ensure that we give you the best experience on our website.
I accept