She ‘lived life to the full’ 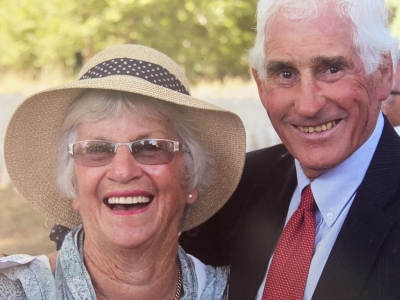 Diana (Diny) Dermer, a long-time DUNZ member and wife of Director John Dermer, passed away, aged 75, at her home on March 1.

Diny played an active part in running their farm at Cheltenham, 15 kilometres north of Feilding, before the couple retired to Palmerston North in 2019.

She was born in Pahiatua, as her parents, Kit and Dombey Beetham, farmed at a little place called Pori, near Makuri, a small village about 30 kilometres east of Pahiatua.

John said: “She went to the Makuri School when she was seven because her parents reckoned she was too small at five (she always described herself as a little runt), and there she learnt very little, she thought.

“They moved to a farm near Waipukurau with a lovely old homestead and a climate that meant you didn’t need a raincoat on the horse’s saddle all the time. (Farm bikes were still in the future).

“Her mum died of breast cancer when Diny was 21. Her parents had sent her off to England at the time, but her mum’s death had a huge effect on her. “We met when we were 15, again when we were 21 and she somehow didn’t get married till I turned up again nine years later,” John said.

She worked as a waitress at Expo 70 in Japan and talked about that experience a lot. She also worked at the British High Commission and remembered sleeping under the desk after a boozy lunch. Sometimes waking up to see the boss’s shoes very close,

John said. “We got married in 1975 and I dragged her back to Waipiko, our little farm near Cheltenham, where we did all sorts of things, including having two daughters. “Diny loved the vege garden, her bantam hens and Pekin ducks, plus all sorts of other plants. She was a natural partner when we started to plant out Waipiko and develop the wetlands.

“She spent lots of time with a spade in her hands helping with actual planting. We had many discussions about what to plant and where.

“Both of us learnt a hell of a lot from our membership of New Zealand Farm Forestry Association, and all the areas – in the North and South Island – we visited as a result of this.

“She always seemed to manage a fruit tree or two into our plantings and as a result, I could pick an apple or a plum while cruising round the farm.”

Camping and tramping were other loves. She completed many of the South Island’s major tramps – the Milford, which she reckoned was the best, and the Abel Tasman, Kepler and Heaphy tracks. Diny was always a friendly face at DU’s conferences. Tributes to Diny spoke of her joie de vivre, laugh and honesty, and described her as a special person who was a lot of fun.

“Diny was such a vibrant and outgoing lady who lived life to the full,” one tribute said.

“She was always full of energy, bright and cheerful and never afraid to say what she thought!! Her warm character and zest for life will be sadly missed by many,” said another.

Diny is survived by John and their daughters Ana and Kate and four grandchildren.

View the embedded image gallery online at:
https://www.ducks.org.nz/flight-magazine/item/425-she-lived-life-to-the-full#sigProIdafd1087dbf
More in this category: « Wetland restoration under the microscope
back to top
We use cookies to ensure that we give you the best experience on our website.
I accept