Boardroom above the clouds 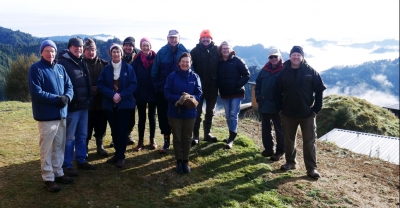 DU Director Dan Steele hosted a DUNZ Board of Directors meeting at his place – Blue Duck Station on the banks of the Whanganui and Retaruke rivers – over Queen's Birthday Weekend in June.

The visit included the formal board meeting and a tour of the station, including a trip up by ATV to see The Chef's Table, the restaurant that Dan co-owns with acclaimed English chef Jack Cashmore.

The restaurant's hilltop location has spectacular 360-degree views of Tongariro and Whanganui national parks, and though Mt Taranaki was shrouded in cloud on the Saturday morning, Mt Tongariro, Ruapehu and Ngauruhoe more than made up for the no-show.

Other ports of call on the tour of the station included the old homestead perched on the bank of the Whanganu River where Dan's parents live, and, up the Retaruke, the remnants of the ill-fated Berryman bridge, which collapsed in 1994, killing beekeeper Ken Richards.

Dan's colourful warts-and-all commentary on the history and characters of the region was eye-opening and capped off an entertaining and educational weekend.

More in this category: « Zealandia calling Wairio on show »
back to top
We use cookies to ensure that we give you the best experience on our website.
I accept