The evolution of Courtney’s Close 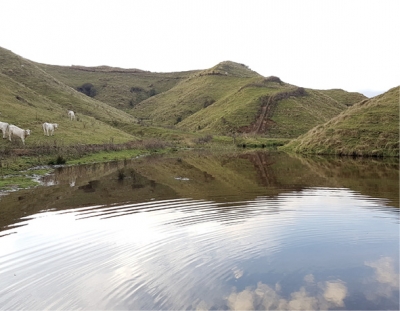 On a parcel of land at Mangaone in Raetihi, in an area that was once an unproductive, narrow, boggy drain bound by strong ridges, co-owners Graeme Berry and Paddy Chambers saw a potential habitat for waterfowl.

DU Patron Di Pritt says, “Since Graeme and Paddy Chambers have been involved at Mangaone, from 2004, they have created six major wetland areas – ranging from an acre to 10 acres – which are all fenced and they have planted about 38 acres. Another four major ponds have also been created.

“It is an amazing achievement, and was fully supported by the previous owner, Jon Preston.”

Their latest project is Courtney’s Close, a wetland area they named after the Horizons employee who helped with the project.

They created it by splitting a 300-acre paddock in half and building a 650-metre deer fence. The wetland area now consists of four ponds outside the fence, and three, with room for two more, enclosed by the fence.

This means animals have access to water but are excluded from the lower wetlands and impurities are filtered out along the way.

Inside the fences Graeme and his partner, Bang, have planted natives, protected from the deer.

View the embedded image gallery online at:
https://www.ducks.org.nz/flight-magazine/item/348-the-evolution-of-courtney-s-close#sigProId2c12e3e308
More in this category: « A marvellous way to see Hauraki Gulf A strong supporter »
back to top
We use cookies to ensure that we give you the best experience on our website.
I accept