Catching up the swans 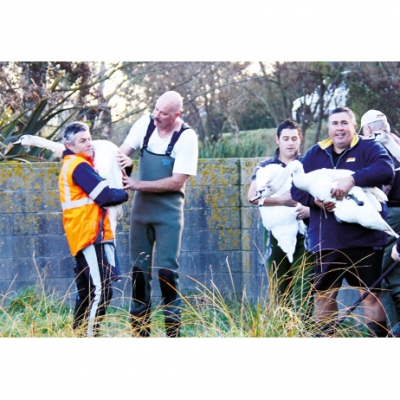 There is something majestic about Mute swans as they glide gracefully on the surface of a lake, no wonder they are in great demand.

Swan Upping* has been an annual event for Ducks Unlimited for about 28 years with some members travelling quite a distance to take part in “catching up the swans”.

This year Ross Cottle and Jim Campbell brought seven swans north. Back in the North Island they collected all the birds that DU members have reared (in total 17) and they were taken to Ross’s place in Masterton to sort into breeding pairs for distribution to members who want them.

Catching the swans is called Swan Upping short for catching up the swans.

Two Cape Barren Geese were caught up in this event. They are Grey Geese  native to the southern coast of Australia called Cape Barren. They have black feet, pink legs, a blue grey body and lime green beak. They have gone to long time DU member Mike Burke in northern Manawatu.

*Swan Upping is an annual ceremonial and practical activity in Britain in which Mute swans on the River Thames are rounded up, caught, marked, and then released.

Traditionally, the Monarch of the United Kingdom retains the right to ownership of all unmarked mute swans in open water, but only exercises  ownership on certain stretches of the river and its surrounding tributaries. This dates from the 12th century, during which time swans were a common food source for royalty. Swan Upping is a means of establishing a swan census and today also serves to check the health of swans.

View the embedded image gallery online at:
https://www.ducks.org.nz/flight-magazine/item/322-catching-up-the-swans#sigProIdfa54b9c77b
More in this category: « Kiwi call monitoring at Tawharanui Fun, games and serious stuff at AGM »
back to top
We use cookies to ensure that we give you the best experience on our website.
I accept