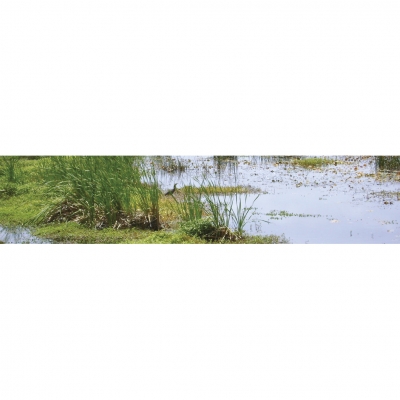 Wetland: Te Henga, perfect spot for a Bitten. Can you spot it? D Roberts

Visiting a dozen years or so ago, Sean O’Connor and Ossie Latham  declared to John Staniland, the resident guardian, that it was ideal for pateke although the whole valley would need predator control. Finally in 2012 the current Pateke Recovery group leader Tiff Browne and Nigel Miller agreed the blend of forest, swamp, and farmlands  offered all that pateke desire. With the large dune-impounded Lake Wainamu just over the ridge it would also be part of the habitat any  released pateke would utilise so that (area) also needed predator control. And while you’re at it they’ll (pateke) probably use the small estuary at the beach so include that!

The Ark has successfully introduced robins, whitehead and kokako and has an extensive mustelid and rat control program. Additionally a volunteer beach care group have been controlling predators for some years and have seen the return of New Zealand dotterel for their efforts. Other volunteers run a trap line at the north of the beach where on a headland there are five species of shearwater; the highest number cohabiting on a mainland site.

I was able to get grants from WWF, and Auckland Council Biosecurity to purchase traps both DOC200s for mustelids [the stainless steel model owing to the proximity of the wild West coast salt air] and also Belisle kill traps for feral cats.

Although the existing trap lines at the beach and at Matuku are fairly short and well managed by volunteers the new requirements have two long trap lines each over 12km and therefore too long for a sustained fortnightly trap checking by volunteers. Another grant gained from the Auckland Zoo Conservation fund is for a contract trapper who will  alternate the long lines.

Fernbird sightings and perhaps territories are to be recorded, as they  believe fernbird will be an indicator species showing a positive response to predator control. Over 100 traps were placed during September and between volunteers doing the shorter lines and a contract trapper doing the long lines we hope to maintain the effort year round. So far the perimeter traps enclose over 1000ha.

Robins from the Ark in the Park sanctuary have dispersed and have been seen around the lake; a kokako has also visited Matuku and tomtit are now being seen at Matuku so the original vision of the Ark in the Park, “ From the ridges to the sea” could become a reality with this new venture aimed at bringing back pateke. The potential then is for other waterfowl and rails to become established in the wetland and gradually disperse  upriver toward the Ark.

Check it out at forestandbird.org.nz

View the embedded image gallery online at:
https://www.ducks.org.nz/flight-magazine/item/320-largest-wetland-in-auckland-area-te-henga#sigProId8c534cb296
More in this category: « Canada needs wetlands (so does NZ) Kiwi call monitoring at Tawharanui »
back to top
We use cookies to ensure that we give you the best experience on our website.
I accept