Watch out predators – Steve’s on the job 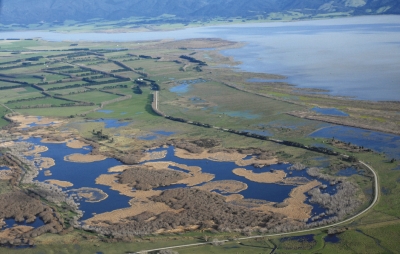 Birds eye: From the left, Mathews Lagoon, Boggy pond, Wairio next to Lake Wairarapa. Years ago all three wetlands were connected DUNZ

In late November Steve Playle did a trap run at Boggy Pond and Wairio. The count was 1 ferret, 1 rat and 10 hedgehogs.

“The ferret was a big bugger and was caught along the stop bank between Mathews and Boggy. This took the total predator count to 23 ferrets, 1 stoat, 2 weasels, 4 cats, 5 rats and 14 hedgehogs.” said Steve.

Rampant growth of grass and weeds along with warm weather meant extra time cleaning around trap sites. Steve also put out another seven DoC250 traps on the Wairio Restoration Block along with two more timms traps along a pine belt where cats have been seen.

Stock tends to interfere with the traps in the Wairio Restoration Block. “We have to live with that unfortunately,” said Steve.

Mice also play havoc with baits with most traps stripped of meat if they have not had a kill in them. Steve said he knows it’s mostly mice because the DoC traps have mouse  droppings in them. He has seen mice in the timms traps too. “With only one ferret for this check it could mean their numbers and getting down or maybe they are feasting on mice or even frogs as the place is alive with them at the moment,” said Steve.

Steve has seen and heard bitterns and another was heard at Mathews pond.

More in this category: « Big reward for capture of bulbul An eye for the birds »
back to top
We use cookies to ensure that we give you the best experience on our website.
I accept