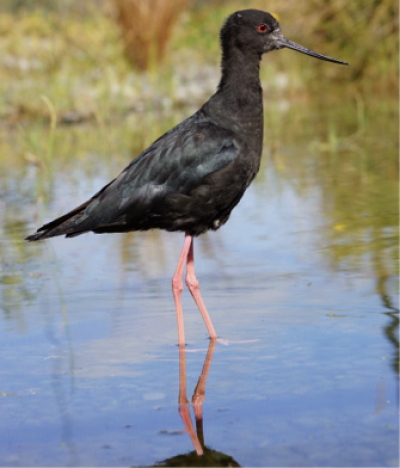 A black stilt in the Mackenzie Basin.

A record number of endangered black stilts (kakī) were released in the Mackenzie Basin in spring after the most productive captive breeding season on record.

Overall 184 kakī were hatched and reared for release by the Department of Conservation, including 49 by the Isaac Conservation and Wildlife Trust (ICWT).

In 1981, when the population plummeted to only 23 known birds in the wild, measures were taken to manage this tiny population.

Kakī, once widespread throughout wetlands and braided rivers throughout the South Island and lower North Island, remain categorised as critically endangered and are the rarest wading birds in the world. Their range is limited to the harsh environment of the Mackenzie and Waitaki basins, often snowbound through the winter months and drought affected during summer.

Controlling stoats, ferrets and feral cats across the Tasman Valley is critical for kakī to survive in their natural habitat.

Without predator control, fewer than 30 per cent of young birds survive. In areas with trapping, the survival rate is 50 per cent.

Captive breeding facilities operated by ICWT and DOC are an essential conservation tool to bring the species back from the brink of extinction, with genetic management one of the multiple tools used to optimise captive breeding outcomes.

The Isaac Conservation and Wildlife Trust continues the conservation work of Sir Neil and Lady Diana Isaac who bequeathed all their assets into the self-funding charitable trust, to continue their legacy and commitment to conservation.

More in this category: « Pukaha releases shore plovers A long way from home »
back to top
We use cookies to ensure that we give you the best experience on our website.
I accept