There was a problem rendering your image gallery. Please make sure that the folder you are using in the Simple Image Gallery Pro plugin tags exists and contains valid image files. The plugin could not locate the folder: media/k2/galleries/200
Thursday, 12 April 2018 04:41 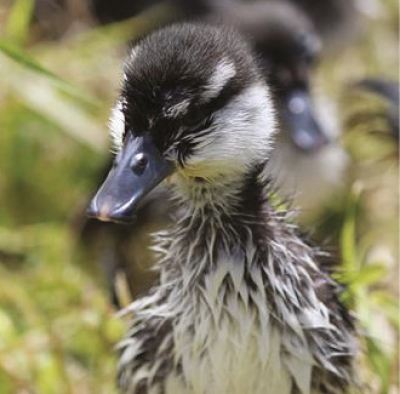 There were 16 Whio ducklings hatched this  season at Mt Bruce. One of our team, Tara, has taken this delightful photo of the latest clutch of whio to hatch at Pukaha this season. These ducklings spent a few weeks here and then were sent to a ‘hardening unit’ at Turangi to ensure that they will be ready for release. Whio live in fast running rivers, so if the ducklings aren’t ‘trained’ before release to get used to the fast water they have a tough time getting used to life in the wild. With an estimated 2500 of these ducks left in the wild, 16 new ducklings from Pukaha is a great result and one we are proud of. Did you know that the whio is on our $10 dollar notes? For more information about whio visit www. whioforever.co.nz More white kiwi Late February, one of the DoC rangers who  regularly monitors the kiwi at Pukaha Mount Bruce found not one, but two white kiwi in a burrow there. This brings the number of white North Island Brown kiwi to be hatched at Pukaha since 2010 to five. The burrow the white kiwi chicks were found  in belongs to the father of the three other white kiwi previously hatched there.

There is a one-in-four chance that chicks produced by the pair will be white, and as kiwi partnerships have been known to last for decades it’s not completely unexpected. But to Pukaha Mt Bruce staff it still feels as if we won the The two chicks were given a health check by  DoC and Pukaha staff who confirmed the pair were in good health. The chicks have started to feed by themselves and the decision was made that they would remain in the reserve rather than be brought into the nursery. Having kiwi hatch and survive in the wild is a great indication that the thousands of dollars each year spent on predator control in the reserve is paying off. Any kiwi chick hatching at Pukaha is a truly special occasion, but the white kiwi are currently unique to Pukaha. Staff will regularly check the two chicks, as their transmitters need to be re-sized regularly as they grow. Helen Tickner General Manager, Pukaha Mount Bruce

News Flash
Sadly, as we were about to go to press, we heard one of the white kiwi chicks at Pukaha Mt Bruce had died.
Read 821 times
Tweet
Published in Issue 163

{gallery}200{/gallery}
More in this category: « Whio release at Little Maketawa Stream Wetlands to protect »
back to top
We use cookies to ensure that we give you the best experience on our website.
I accept