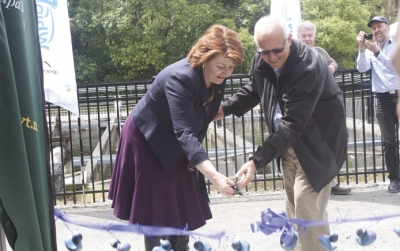 Official opening: Maggie Barry and Albert Brantley cut the ribbon to open the Hardening facility. Peter Russell
It is looking like another record year of ducklings being produced with hopefully 39 being released. Peacock Springs with 18, Mt Bruce with 16 and Orana with five. Could have been more but you can never count your ducklings till you have them on the ground.
It is really great to see more ducklings produced each year and could be more if all the breeders had new pairs.
This facility has been build at the Tongariro National Trout Centre in some of the trout runs. I did go up earlier in the year and with helping Andrew Smart did the shaping of what you can see in the photos.
There were 12 ducks in the enclosures doing well and a lot flying around and diving into the water. Another 11 birds were put in the other side.
New Hardening Facility
This new facility will make it easier for  North Island breeders to send their birds there, rather than the South Island for hardening.
On December 4 last year I took six birds, that came from Peacock Springs, up to the Trout Centre for the opening of the Hardening Facility by the Minister of Conservation Maggie Barry and the CEO of Genesis Albert Brantley, as this was a joint project between Genesis and the Department.
At the opening there was a welcome from Haukainga for the visitors and then a welcome from Mihi/Whakatau to manuhiri/ visitors - Ned Wikaira followed by a reply on behalf of the visitors -Pou Tairanghau. We had refreshments by the new facility and heard speeches from Albert Brantley, Maggie Barry and then the National Whio Recovery Group Leader Andrew Glaser.
The Minister and Genesis CEO then cut the ribbon to declare the facility open. This facility was funded by Genesis and the Department of Conservation.
The birds were released into the new enclosure which was great.
Peter Russell
Whio Captive Co-ordinator
Read 971 times
Tweet
Published in Issue 163
Tagged under

View the embedded image gallery online at:
https://www.ducks.org.nz/flight-magazine/item/198-captive-whio-and-new-facility#sigProIdad8d05fde4
More in this category: « The secret life of male bitterns Whio release at Little Maketawa Stream »
back to top
We use cookies to ensure that we give you the best experience on our website.
I accept