Displaying items by tag: Letters to The Editor

Letter to the Editor:

I have been a member of DUNZ since the early 1980s, and a past Director. I owned my first wetlands in 1962 when I was 18 (100 acres in the Waimarino Wetlands, now known as the Deans Block), and I have been actively involved in wetland ownership and preservation ever since. I am currently a partner in the wonderful ‘Home of the Duck’ wetlands in Broadlands.

I have been a keen shooter most of my life, but now chose not to shoot live game. I still  attend duck season opening weekend, set  decoys and call birds, but decided to not kill birds any more. Even so, I still cannot help but draw a mental bead on any duck or pheasant that flies past, and I enjoy clay bird shooting. As a youngster with my father I have shot godwit on the Manukau tidal flats outside the then Henry Kelliher home. I think it was legal then, maybe not! I have shot sparrow and pigeon at the Auckland Met Gun Club, seagulls, hawks, and starlings when I got bored as a stroppy young duck shooter,  pheasant, and quail, and duck aplenty. On  reflection, I am not pleased with some of my shooting decisions, but I have many  wonderful memories of shooting seasons past and the camaraderie that accompanies the hunt.

The reason for this preamble is to firmly place myself in the shooters camp, although I no longer shoot birds. I feel my past and present experience give me a fairly balanced view of wetland conservation trends, and I would like to once again raise the old discussion on the position and relevance of Ducks Unlimited in a modern society. There are many indications of the modern city view of shooters.

A recent (June 2013) Campbell Live programme on TV3 highlighted the scorn heaped on swan cullers. Even though it was entirely legal, and possibly environmentally justifiable, it was presented in the worst  possible way. It was hard not to see this as a pretty squalid and cruel affair.

With the urbanisation of the country and more farms being turned into larger corporate style holdings, there seems to be less and less city folk interested in shooting game. Indeed, there has been a very strong swing against shooting with a majority seeing killing birds for ‘sport’ as barbaric. Forget the argument that their lamb chop for dinner has come from a cute baby sheep- live bird shooting is seen as a  brutal and despised occupation. There used to be scores of cars and utes, loaded with eager blokes and an over excited Labrador dog and towing a shabby duck punt, all heading out of Auckland for that first May weekend. This last year I was on the southern migration, and several of us remarked that we saw very few like minded souls. Many traditional swamps and ponds seem undershot compared to years past.

I am blessed to live in the Mahurangi region, close to the magnificent Tawharanui Regional Park. Apart from some of the world’s most beautiful coastline, this park has a total predator control system and a significant wetland presence. Ducks  Unlimited and Banrock Station Wine donated a very generous $40,000.00 to the wetland  development a few years ago. I was at a recent Queen’s Birthday planting exercise with a turnout of about 180 volunteers over two days. There was a cross section of the community, but all with a conservation bent. Speaking with some of those present, there seemed an underlying feeling that Ducks Unlimited was a vaguely threatening entity to have as a benefactor. There is that strong perception that Ducks Unlimited is a shooters ‘club’, and certainly I cannot dispute the general correctness of this. I would have found it difficult to find DU membership prospects.

I note with interest that the Directors of DUNZ are engaging with other like minded groups in an endeavour to harness the  combined membership of other environmental groups, all whom seem to be confronting  similar dwindling membership. It is a concept that makes sense to me. As an aside, where does The National Wetland Trust fit into all of this?

Is now a time to yet again consider a change of name and direction? The direction would be much the same as the existing core principal of Ducks Unlimited- preserving and creating wetland habitat- but the emphasis would come off the shooting of ducks.

We already have a vehicle in the DU affiliate “Wetland Care”, and maybe this could be pushed to the fore?

There would be major problems involved. Would this alienate existing members, most of whom are keen hunters, and who have  traditionally been the backbone of DU? Would it excite any potential new members in major numbers? Would it encourage sponsors? Is there the energy, resources or passion to  rejuvenate this group?

I am conscious of the danger of being a  standoff commentator with no real input to a solution, if indeed one is needed. I hope my comments are taken as positive input into a group that has been doing such fantastic  environmental work over many years.

Dear Editor,
After reading the article written by Neil  Hayes on ‘A brief History of Ducks Unlimited Operation Pateke’ in the July 2014 issue of Flight, I feel there are a number of claims in his reference to pateke at Cape Kidnappers, which are inaccurate and need rectifying. I have taken the trouble to consult with the manager of The Cape Sanctuary, Tamsin Ward-Smith, to ensure I have the facts right.
In the past Mr Hayes has been in print promoting his criticism of the introduction of pateke to Cape Sanctuary, formally the Cape Kidnapper’s and Ocean Beach Wildlife Preserve. This time he goes further. He suggests that although the sites (Cape Sanctuary is one of five which he states are  failures), had predator control programmes,  they all failed because: (1) there are no wild populations of pateke in the area, (2) habitat was not suitable, (3) no suitable flock sites, (4) no suitable pateke habitat adjacent to these sites and (5) no suitably protected adjacent wetland for population expansion. Well, I’m afraid I don’t know what Mr Hayes regards as a success but for those of us with any knowledge of the pateke project at Cape Sanctuary it is anything but a failure.
Nearly every one of the 40 plus stock dams and ponds at the sanctuary have resident pairs. Numbers in excess of 60 birds are counted on the main flocking dams. Over 60 juveniles fledged last season (and that from only 10 pairs that were observed). Pateke are so numerous that they are no longer monitored to the ninth degree. They don’t need to be. They’re self-sustaining.
Amongst Mr Hayes reasons for proclaiming Cape Sanctuary is unsuitable for pateke is that there is no history of pateke in the area. This  is incorrect. A palaeofaunal survey conducted  by Trevor H Worthy specifies that pateke do indeed have a history there. Many pateke bones have been identified in the area. The fact that pateke are no longer present does not mean they should not be returned. Cape Sanctuary is about restoring the peninsula with fauna and flora representative of a healthy Hawke’s Bay forest and coastal system. Pateke were once a component of this system and so it makes sense to restore the wildlife that once inhabited the region as well. To date seven bird species have been successfully restored to Cape Sanctuary, including pateke. Programmes are also underway for four other forest bird species, as well as translocation programmes for grey-faced, Cook’s and diving petrel, tuatara and giant weta.
The habitat on Cape Kidnappers peninsula  may not be what many may perceive to be ideal for pateke; pasture and pine forest dominate. However the remnant wild populations that exist in NZ today may only reflect the last strong-holds for this species and not necessarily a preferred habitat. Those members of the Recovery Group who supported an initial trial of 40 pateke to Cape Sanctuary in 2008 must be commended for breaking the mold and taking a risk. Pateke are known as a forest duck after all and extensive wetland areas are certainly not what many pairs at Cape Sanctuary are thriving  in. Bathtub sized ponds suffice. Pateke are  often seen in ‘mobs’ at night time 100s of metres from water busily working the pasture invertebrates.
Who are we to say what is suitable habitat and do we have options to be so choosy if we are to establish predator ‘safe’ populations and secure the long-term survival of this species?
True, pateke are moving out of Cape Sanctuary’s 2500 hectare protected area. Pateke sightings are regularly reported on the Maraetotara River, at Te Awanga and even as far as Clive River. Some may be lost, but by Mr Hayes own admission pateke are very territorial and, since the project is so successful, juveniles are forced out of the sanctuary simply because it is full. Some failure! If a few birds are lost outside Cape Sanctuary, the fact there is a thriving population within the predator controlled area, providing a “Pateke Bank,” has to be good news for the species.
Future protection for overflow birds (and not just pateke), is in the pipeline with a large scale, multi-agency, predator control and habitat restoration programme being  established over 26,000 hectares immediately  adjacent to Cape Sanctuary on outlying farmland. So in the longer term the odds on survival of pateke outside Cape Sanctuary will be high.
The fact that the Cape Sanctuary population is remote from the Northland and Coromandel regions has to be a plus as well.
I wish to correct Mr Hayes claims so that Banrock Station Wines can rest assured their initial sponsorship was not in vain, and that the efforts of volunteers and breeders has paid off. Pateke are thriving at Cape Sanctuary here in Hawke’s Bay.
Kevin Campbell

Dear Editor,
We’d like to thank the organisers of DUNZ  annual meeting for a fabulous weekend at Brakenridge Lodge, Martinborough.
Once again we heard the conservation message and saw first-hand the amazing progress of wetland restoration being done. I believe the expertise we have amongst our membership and the track record of DU makes this organisation the leader in wet land  preservation and re-establishment in NZ.
We are light years ahead of any other group.
Our suggestion is that the Board should be striving to become the “Consultants” of the industry.
The speaker from the Regional Council gave them the credence to do so. Other organisations are getting the kudos but DU is doing the practical work.
Once again thanks to all those doing the job.
Alice and Ross Hood
Published in Issue 161
Tagged under
Read more...
Thursday, 22 February 2018 20:10 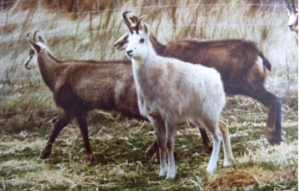 Thank you Liz, for another excellent Flight magazine. Full of interest. It’s always been a strong point of DUNZ.

I particularly enjoyed the Whio News 2015 (page 14) and the “Ghost flow” photo of the whio of very pale colouring that had set up on the Whakapapanui. Peter Russell will have been well aware, but I think it’s worth mentioning that the bird is of the leucistic colour phase. Leucism is an abnormal plumage condition, caused by a genetic mutation that prevents pigment, particularly melanin (which produces black), from being deposited in a bird’s feathers. It occurs also in Black swan (personal comment Ken Meirs). It occurs too in animals. I treasure a photo I took many years ago of this leucistic chamois (right) which had been netted in the Waiau river country.

Published in Issue 167
Tagged under
Read more...
We use cookies to ensure that we give you the best experience on our website.
I accept